In late November 2014, I was at Sony studios (old MGM) recording a film scored by Danny Elfman. I signed a Non-Disclosure, so let’s just say it was sultry, atmospheric music to a picture based on a highly popular book whose title certainly does not feature “many hues of black and white” ! No truth to the rumor that the Marquis de Sade produced…

One day while working on this feature, all computers at Sony had been hacked and shut down! Evidently, the digital assault was tied to the intended Christmas Day release of The Interview, the comedy about an attempt to assassinate North Korean leader Kim Jong-Un. North Korea had threatened Sony that it would be launching an attack, in this case a cyber one. Below is a photo of 1 of the 4 helicopters that hovered over the studio for hours! 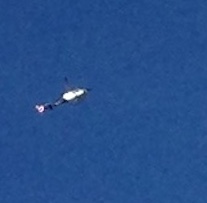