“As composer, it is important to understand the intent of your project. A film director needs appropriate music to help propel the narrative of the story; a video game developer requires looping ambient tracks or dynamic, adaptive elements to set the tone for a particular game level, and effective linear music for cutscenes (in-game cinematics); and a jingle producer calls for an immediately catchy tune to brand an indelible impression on the listener.

It is my role as composer to grapple with these many possibilities: underscoring the obvious, enhancing hidden sentiments, and sometimes even purposely leading the experiencer astray – (think the kitty cat around the dark corner in a “Friday the 13th” sequel!)

There are also those times when I simply feel compelled to communicate something intangible through the language of music.”

Are you a Creative in need of Music? Contact Richard about your project; explore the possibilities!

Hear some of Richard’s thoughts on music, music-making, and the “Musozoic!”   5 snippets were taken from a radio interview on LA’s KMozart FM Station… 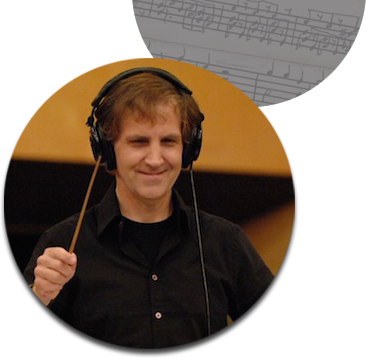